A coalition of organizations devoted to fossil fuel divestment reports that “On the one-year anniversary of the Paris climate agreement, the value of assets represented by institutions and individuals committing to some sort of divestment from fossil fuel companies has reached $5 trillion.” The value of assets diverted from fossil fuels has doubled over the last 15 months, as 688 institutions and 58,399 individuals across 76 countries have committed to divest from fossil fuel companies. Pension funds and insurance companies represent the largest sectors committing to divestment. The report observes, “From its start on American college campuses five years ago, fossil fuel divestment has grown into a truly global movement, with more than half of all divesting institutions and individuals based outside the United States. The sectors that initially propelled the movement—universities, foundations, and faith-based organizations—continue steady growth, accounting for 54 percent of new commitments made. However, as large private and institutional asset holders recognize the reputational, financial, and legal risks of remaining invested in fossil fuels, divestment has spread to new sectors, including large insurers, pension funds, and banking institutions. Today no single sector accounts for more than a quarter of commitments made.” The report adds that, “While the election of Donald Trump, who campaigned on a pledge to withdraw from the Paris Agreement, calls into question the United States’ ongoing commitment to reduce emissions, it does not affect the broader structural changes moving the energy sector away from fossil fuels. Any setback to official US climate policy elevates the importance of divestment as an organizing and financial tool to speed the clean energy transition.” A notable accomplishment of the divestment movement came in March, 2016, when the Rockefeller Family Fund pledged to divest as quickly as possible from all fossil fuels, including selling their shares of Exxon Mobil, as well as coal and Canadian tar sands. A century ago John D. Rockefeller Sr. made his fortune running Standard Oil, which ultimately evolved into Exxon Mobil. The Fund states:  “there is no sane rationale for companies to continue to explore for new sources of hydrocarbons.”** 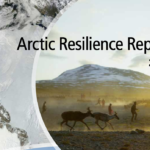