The Reagan Administration cuts energy R&D funding by more than half; numerous battles erupt in Congress over the Department of Energy’s attempts to reduce its climate research budget and the content of climate research programs; the Reagan Administrative is supportive, however, of two major developments related to climate policy:  the international treaty to protect the Ozone layer, and the creation of the Intergovernmental Panel on Climate Change.

As Karen Fischer-Vanden comments, public dissatisfaction with some of the Carter Administration’s R&D funding decisions “fed an already existing national trend toward more conservative views—including the desire for less government and industry deregulation where preferred actions of private businesses are induced through market mechanisms.”* “Carter had earlier asked us to lower our thermostats and wear sweaters.” wrote Richard Cohen in The Washington Post, “He wore one himself. Reagan, who succeeded Carter in the White House, wore only a smile. For him, there was no energy crisis. Whereas Carter had insisted that only the government could manage the energy crisis, Reagan, in his first inaugural, demanded that government get out of the way. Speaking of general economic conditions at the time, he said, ‘Government is not the solution to our problem.’ He went on to call for America to return to greatness, to ‘reawaken this industrial giant,’ and all sorts of swell things would happen.”** The Reagan administration is instrumental, however, in supporting the Vienna Convention for the Protection of the Ozone Layer [see 1985] and the creation of an international organization to assess scientific and socio-economic information related to global climate change [see 1988]. 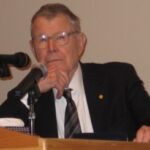 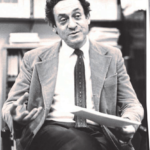