In a remarkable show of bipartisanship, the Senate vote for the Clean Air Act is unanimous, the House vote 374 to 1. The New York Times describes the legislation as “far broader in its reach, far tougher in its deadlines and penalties than any of its three predecessors.”* The principal architect of this law is Maine’s Senator Edmund Muskie, a Democrat, chair of the Senate Subcommittee on the Environment; he partners with Tennessee Senator James Baker, a Republican, to develop and promote the legislation. The law gives broad powers to the new Environmental Protection Agency (EPA) to set national “ambient air quality standards,” for specific pollutants, and charges the states with writing “implementation plans” to achieve those standards. It provides for regulation of both “mobile sources” — cars, trucks, aircraft — and “stationary sources” — factories, refineries, power plants. Greenhouse gases carbon dioxide and methane are not among the “criteria pollutants” listed in the law for immediate regulatory attention, but the law provides for periodic reassessment of and additions to the list of regulated pollutants. If the EPA determines that new pollutants “cause, or contribute to, air pollution which may reasonably be anticipated to endanger public health or welfare,” it must regulate them. The law’s definition of effects on “welfare,” “includes, but is not limited to, effects on soils, water, crops, vegetation, manmade materials, animals, wildlife, weather, visibility, and climate.”** During the signing ceremony in the Roosevelt Room, President Richard Nixon observes, “I would only hope that as we go now from the year of the beginning, the year of proposing, the year 1970, to the year of action, 1971, that all of us, Democrats, Republicans, the House, the Senate, the executive branch, that all of us can look back upon this year as that time when we began to make a movement toward a goal that we all want, a goal that Theodore Roosevelt deeply believed in and a goal that he lived in his whole life. He loved the environment. He loved the clean air and the open spaces, and he loved the western part of the United States particularly, which will be greatly affected by this kind of action.”*** The American Chemical Society Journal comments: “The new year 1971, the second in the seventies — the environmental decade — came in with a new air pollution control law.  Without question, the new law is tough. It is also complicated … With more deadlines per square inch than any other piece of legislation, [it] is the best blueprint for clean air the nation has ever had.”****

Photo: President Lyndon B. Johnson signing the 1967 Air Quality Act — predecessor to the Clean Air Act of 1970 — in the East Room of the White House. 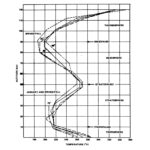 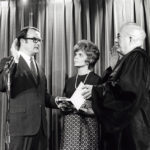