Physicist Gilbert Plass of Johns Hopkins and colleagues publish “The Carbon Dioxide Theory of Climatic Change,” to account for “the general warming of the climate that has taken place in the last sixty years” in the journal American Scientist. The article questions: “What is the reason for the recent temperature rise that is found throughout the world? Will this trend toward warmer climates continue for some time? The carbon dioxide theory may provide the answer.” After citing various other theories for warming, Plass notes: “Although the carbon dioxide theory of climatic change was one of the most widely held fifty years ago, in recent years it has had relatively few adherents. However, recent research work suggests that the usual reasons for rejecting this theory are not valid.” Evidence demonstrates that “[t]he infrared absorption properties of carbon dioxide, water vapor, and ozone determine our climate to a large extent. Their action has often been compared to that of a greenhouse… [A]s the amount of carbon dioxide increases… the outgoing radiation is trapped more effectively near the earth’s surface and the temperature rises. The latest calculations show that if the carbon dioxide content of the atmosphere should double, the surface temperature would rise 3.6 Celsius…” The article goes on to discuss the impact of fossil fuel combustion:  “Recently… man has added an important new factor to the carbon dioxide balance… [C]ombustion of fossil fuels is adding 6.0 x 109 tons [tonnes] per year of carbon dioxide to the atmosphere at the present time and the rate is increasing every year. Today this factor is larger than any contribution from the inorganic world. Thus today man by his own activities is increasing the carbon dioxide in the atmosphere at the rate of 30 per cent a century… Even if there may be some question as to whether or not the general amelioration of the climate in the last fifty years has really been caused by increased industrial activity, there can be no doubt that this will become an increasingly serious problem as the level of industrial activity increases. In a few centuries the amount of carbon dioxide released into the atmosphere will have become so large that it will have a profound influence on our climate.”* 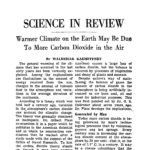 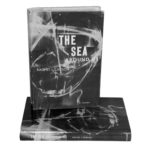